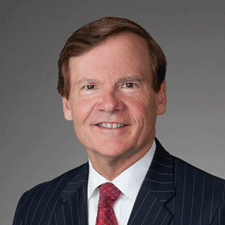 Senator Tim Hutchinson is a Senior Fellow with the American Conservative Union Foundation’s Nolan Center for Justice. A conservative stalwart, Senator Hutchinson previously represented the State of Arkansas in the U.S. House of Representatives from 1993 to 1997 and the U.S. Senate from 1997 to 2003 where he had a lifetime 97% ACU rating.

Before entering politics, Hutchinson served as a pastor. He also co-founded a Christian radio station (KBCV) in Bentonville and founded a Christian school in Rogers, Arkansas.
During his time in the Senate, Hutchinson served on the Aging Committee; Armed Services Committee; Health, Education, Labor, and Pensions Committee; and Veterans’ Affairs Committee. While serving on the Health, Education, Labor, and Pensions Committee, he helped shape the No Child Left Behind legislation and took a leading role in the passage of Education Savings Accounts.