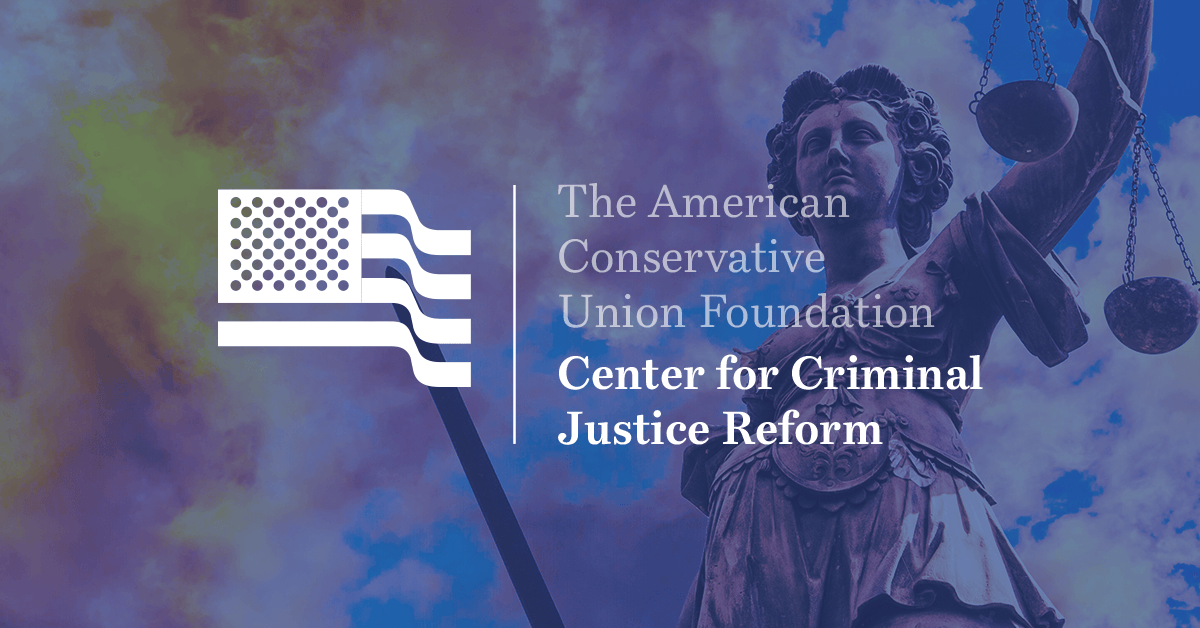 We provide leadership for the growing conservative consensus that our criminal justice system is badly broken, doesn’t make us safer, and needs to be fixed.

Get the full story > Get the full picture on criminal justice reform in your state. The Conservative Principles of Justice guide our policies and thinking at the Center, and it is our goal to encourage their application whenever and wherever possible.

Where lawmakers have applied these principles to the justice system, crime has dropped, there are fewer people in prison, and the taxpayers have saved billions of dollars.

We know it is the nature of bureaucracy that government agencies grow in size and inefficiency. The justice system must be held accountable for wise use of tax dollars just as it holds offenders accountable for their actions.
2)

Offenders should be held accountable to make restitution to their victims.

Crime is more than lawbreaking – it is victim harming. Victims should be involved at all stages of the justice process, and the system should aim to repair the harm caused by the crime whenever possible. Offenders should be held accountable to make restitution to their victims. Read more here.
3)

Proof that a person intended to break the law should be required for them to be convicted of a crime.

Evil intent (mens rea) has long been a required element of all crimes. In recent years, however, the mens rea requirement has been dropped in favor of finding criminality even if there is no intent to break the law. Thus, an act committed in good faith can become the basis for a criminal conviction and a prison sentence. This is wrong, and mens rea must be restored as a key element of every crime.
4)

We should reserve costly prison beds for truly dangerous offenders.

The greatest power we cede to government is the ability to put someone in prison. While prisons are necessary to isolate offenders who threaten the safety of the community, there is a growing tendency to overuse prisons even when the public is not endangered. There are proven ways to hold non-dangerous offenders accountable without sending them to prison. We should use costly prison beds for the truly dangerous. Prisons are for people we are afraid of, but too often they are used for people we are merely mad at.
5)

The harm done by a sentence should never be greater than the harm caused by the crime.

Cases should be decided individually, not as an assembly line of one-size-fits-all sentences. The harm done by a sentence should never be greater than the harm caused by the crime.
6)

Congress should not create a federal crime unless the activity is conducted across state lines or international borders.

Crime that crosses state lines and national borders is the proper purview of federal laws. Other than those limited situations, crime is an inherently local problem and should be governed by local and state laws. However, in recent years Congress has federalized many crimes such as carjacking which have no national scope but merely serve the purpose of being politically popular. Only those crimes that have a national reach should be federalized. Other crimes should be left to local law enforcement that is more responsive to their residents.
7)

We support expanding courts that specialize in dealing with specific populations, e.g. veterans, people with mental illness, and those with drug and alcohol addictions.

We recommend greater use of problem-solving courts, such as drug courts, veterans’ courts and mental health courts tailored to the special problems faced by these populations.
8)

The goal of prisons should be to prepare Inmates to leave prison better than they go in.

Prisons should do more than warehouse inmates. They should prepare offenders for their return to society by providing educational programs such as GED classes, drug treatment, anger management, and job skills. The cost of these programs is far exceeded by the savings from the resulting drop in crime rates.
9)

Prisons should be safe for staff, volunteers, and inmates.

Prisoners should be safe inside prison. The government prevents inmates from defending themselves; so it is incumbent of the government to protect them from assault, including rape.
10)

No matter what terrible things offenders have done, they are children of God and staff should never demean them.

No matter what terrible things offenders have done, they are children of God and created in His image. Prison staff should treat inmates with respect and should not demean them. The way offenders are treated in prison will have a large impact on whether they will be good neighbors upon release.
11)

Volunteers should be encouraged to provide services and programs inside prisons, and to mentor inmates after they are released.

Dr. Martin Luther King, Jr. said, “To change someone you must first love them, and they must know that they are loved.” Government programs can’t love prisoners, but volunteers can. Prisons should make a priority of encouraging volunteers to provide services and programs inside prisons and serve as mentors after release.
12)

Prisons should encourage healthy relationships with families – the most important factor in successfully and safely returning to the community after release.

Many prison policies make it difficult for families to remain in contact. Yet, studies show that an intact family is the greatest positive factor in ensuring a successful transition from prison to the community. Prisons should establish policies and programs that strengthen families and encourage frequent contact with them.
MORE ON THIS ISSUE

Your support can make a difference in the fight for reform. Donations go directly toward making our communities safer and ending the revolving prison door.